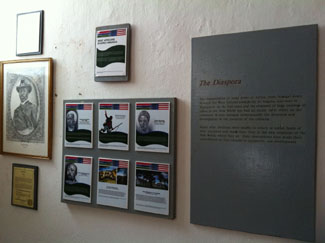 
Historians often present African-American history as if it started when Africans boarded slave ships. And as the enslaved made contributions to the development of the United States, society either ignored their contributions or acknowledged their Blackness while ignoring their specific African heritage.

These panels present the history of several men and women who made contributions to the development of the United Sates during a time when many Europeans believed that Africans were incapable of intelligent thoughts. When providing their history, we included information about their specific African heritage to inspire Africa’s children at home and abroad.

Presented in March 2012. The panels now hang at:

Send Us an Email